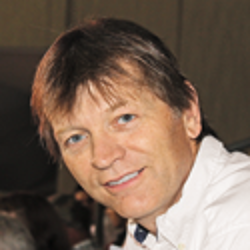 Guest columnist Matt Przybyciel reviews the structure, behavior, and applications of both alkyl- and phenyl-fluorinated phases in HPLC.

Reversed-phase high performance liquid chromatography (HPLC) is one of the most utilized forms of chromatography (1). The C8 and C18 stationary phases are the most widely used for reversed-phase HPLC. However, analysts occasionally encounter difficult separations for which selectivity, ruggedness, or reproducibility are not obtained easily using traditional C8 and C18 phases. These separations might require the use of novel or selective phases that interact with analytes in a manner different than C8 or C18 phases (2). These types of stationary phases separate compounds based upon selective stationary phase interactions such as steric recognition charge transfer or π–π interactions (3). One class of selective or novel phases that have been used for a variety of separations are fluorinated phases (4). These fluorinated phases have provided an alternative and complementary separation for many analytes performed on C8 or C18 columns. Fluorinated phases can provide different elution orders, leading to enhanced selectivity for difficult-to-separate compounds. As a complementary approach, fluorinated phases can aid in identification, proof of purity, and quantitation. Fluorinated phases also offer chromatographers the possibility to use simpler mobile phases and avoid using extreme pH conditions and complex mobile-phase preparations.

-dodecyl are commercially available. For the branched chain, only the structure shown in the figure is available commercially, and its preparation has been described by Kamiusuki and colleagues (5). Many of these alkyl-chain fluorinated phases contain both fluorinated and unfluorinated methylene units (see Figure 1) (6). These unfluorinated methylene units generally are found at the base of the alkyl chain closest to the surface of the silica and can serve to stabilize the bonded alkyl chain (7). However, the stability of the fluorinated alkyl bonded phases under various reversed-phase solvent and pH conditions has not been studied. This is in contrast to the extensive studies that have been performed to characterize the stability of alkyl phases under a variety of conditions (8,9).

The fluorinated phases have shown some size and shape selectivity, particularly for aromatic molecules (13,14). On the Fluofix phase, investigators have found that planar polyaromatic compounds such triphenylene are eluted faster than on an octadecylsilane (ODS) phase, and that nonplanar molecules such as diphenyl and terphenyls are retained longer on the Fluofix phase (13). Yamamoto and Rokushika (14) have studied fluorinated alkyl phases using computer simulation of the molecular interaction energy based upon a set of solute molecules and various mobile-phase compositions. They prepared a C8 alkyl phase and two fluorinated phases bonded to the same silica, thus allowing for direct comparisons between unfluorinated and fluorinated alkyl phases. Additionally, their solute test set was comprised of neutral molecules, thereby minimizing the influence of silanol group interactions. Silanol group interactions can dominate the reaction mechanism of many solutes, in particular, basic compounds such as nortriptyline. The use of neutral molecules can provide for an unconfounded explanation for the retention mechanism and allow for a clearer understanding of the role of the bonded stationary phase (15). The computer simulation provided some insight to the retention mechanism of branched and linear fluorinated alkyl stationary phases. The authors observed that the fluorinated phases used in the study exhibited lower retention for both neutral n-alkanes and polyaromatics when compared with the C8. In addition, at higher levels of methanol (90:10 [v/v] methanol-water solution), they observed that anthracene was eluted before benzene on the branched fluorinated phase. Based upon this chromatogram and the aromatic test probes, they concluded that the interaction of planar and rigid aromatic solutes differed from nonplanar aromatic solutes and the alkyl fluorinated phase might display some shape–size selectivity, as seen in earlier investigations (13). Furthermore, they concluded that the retention of the aromatic test probes at higher methanol concentration was obstructed by the methanol molecules solvating the solute, reducing the retention of larger aromatics.

Euerby and colleagues (16) compared several commercially available phenyl and alkyl chain perfluorinated phases for reversed-phase LC using principal component analysis (PCA). A mixture of hydrophilic and lipophilic basic analytes was used to generate their PCA data. Using this mixture, they compared fluorinated and nonfluorinated alkyl as well as phenyl phases. From the PCA analysis, they concluded that both alkyl and phenyl perfluorinated phases exhibited high retentivity for bases with mobile phases containing high organic modifier and low buffer concentration and that this retentivity is controlled by a hydrophilic interaction chromatography (HILIC) mechanism. Similar to earlier work (10), they also found that neutral analytes were less retained on the perfluoro-phases compared with the nonfluorophases. Additionally, they showed that the fluorinated phenyl phases retained basic analytes even more than fluorinated alkyl chain phases. The authors also concluded that the increased retention for basic analytes using fluorinated phases was particularly useful for LC–MS analysis, in which mobile phases containing high levels of organic modifier frequently are used to enhance sensitivity. Neue and colleagues (17), using several chromatographic test procedures, have developed a database of more than 100 commercially available packings in which they can distinguish fluorinated packings from other types of stationary phases such as C18 and phenyl. They also found that both fluorinated alkyl and phenyl phases exhibit unique selectivities for polar analytes such as propranolol. Propranolol is secondary amine with an alcohol group and an ether group.

Valko and colleagues (18) have used fast gradient HPLC to characterize chemical lipophilicity and measure molecular descriptors; this HPLC technique is called chromatographic lipophilicity. These molecular descriptors, used in a general solvation equation, have been used to calculate chromatographic retention. In drug discovery research, the molecular descriptors and the general solvation equation are used to coordinate partition measurements, solubilities, and biological transport processes. Traditionally, molecular descriptors have been determined using octanol–water partition by the shaken flask method; however chromatographic lipophilicity is much quicker. Valko and colleagues chromatographed and recorded the retention time for compounds using a fast gradient (0–100% organic in 3 min). As part of their research, they investigated a number of organic mobile modifiers and stationary phases. From these investigations, they have demonstrated a unique selectivity of perfluorinated alkyl-chain stationary phases FluoroSep-RP octyl and Fluophase RP propyl (see Table I) using 2,2,2-trifluoroethanol (TFE) as organic mobile phase modifier. TFE has been used extensively as a cosolvent in the study of protein and peptide (20) and also has been used previously for the characterization of HFD phases (10,21). Using fluorinated columns and TFE as a mobile phase modifier, Valco and coworkers (18) found that H-bonding acid compounds such as 4-nitrophenol are retained less then the corresponding nonfluorinated alkyl phase and that basic compounds such as caffeine are retained more. They attribute this unique selectivity to the strong adsorption of the TFE molecules into the fluorinated phase, thereby changing the chromatographic surface energy and enabling the retention of H-bond bases and the "repulsion" of H-bond acids.

Micellar LC, which employs a surfactant added to the mobile phase, has suffered from additional band broadening when compared with conventional reversed-phase LC with hydro-organic eluents and excess retention of hydrophobic compounds. One solution to improving band broadening has been the use of the fluorinated alkyl phases, in particular, the fluorooctyl phase (19). This phase offers several advantages for micellar LC, including reduced interaction between the surfactant's hydrocarbon functionality and fluorocarbon functional groups of the bonded phase. As seen in earlier investigations, this reduced interaction lowers retention for hydrocarbon compounds. Furthermore, the reduced interaction also has improved band broadening due to the improved kinetics of mass transfer across the stationary phase. The lower retention for hydrocarbons requires lower micelle concentration, which leads to better efficiency. Thomas and colleagues (22) have used a 1000-Å fluorooctyl column to further reduce the retention for hydrophobic compounds. They have discovered that the wide pores of the silica support improve the access of the micelles to analytes contained in the pores. Additionally, the bonded fluorooctyl phase has showed improved efficiency as well as reduced retention for the higher alkylphenone homologues.

The following chromatographic guidelines can be drawn from our discussion of possible chromatographic retention mechanisms of fluorinated alkyl phases. Compared with traditional C8 and C18 phases:

The retention properties of the PFP have been studied by Sadek and Carr (15). They concluded that the PFP material could be useful for the separation of groups containing aromatic groups. Unfortunately, they were unable to provide any firm retention mechanism for explaining this behavior. However, they could not rule out π–π interactions, which have been reported to play an important role in the retention mechanism of highly conjugated aromatic solutes (24). Sadek and Carr were cautious about proposing retention mechanisms for polar hydrogen bond acceptor or donor solutes used in their study because of the possibility of silanophilic interactions.

In addition to reversed-phase chromatography, G. Felix and colleagues (25) have used normal phase chromatography with hexane mobile phase to retain and separate PAHs and polyaromatic heterocycles via charge transfer interactions. PFP has been shown to increased retentivity and widely different selectivity for not just aromatic fluorine compounds, but for aromatic halogenated compounds as well (26,27).

As discussed earlier, Euerby and colleagues (16) concluded that both alkyl and phenyl perfluoro- phases exhibit high retentivity for bases with mobile phases containing high organic modifier and low buffer concentration and that this retentivity is controlled by a HILIC mechanism. They also showed that the fluorinated phenyl phases retained basic analytes even more than fluorinated alkyl chain phases. This type of retention behavior for the PFP phase has been also reported by Bell and colleagues (28).

Przybyciel and Santangelo (29) have studied the retention behavior of monosubstituted and disubstituted nitronaphthalenes on the PFP phase. As part of that study, they prepared C18 and phenyl phases using the same base silica as the commercially available FluoroSep-RP Phenyl PFP column (ES Industries) (Table I). Only the PFP column was able to resolve a nitronaphthalene mixture completely. Additionally, the PFP column retained every nitronaphthalene component of the mixture longer than either the C18 or phenyl column. The retention behavior of the PFP phase for separation of the nitronaphthalenes might suggest some π–π interactions as well as other interactions such as possible charge-transfer or electrostatic modes. The elucidation for retention mechanism for PFP remains largely unexplained and will require future investigation. Przybyciel (23) has continued to explore the separation of PAHs and nitroaromatics using the pentafluorophenyl phase. From this work, it is believed that fluorinated phases might be useful for preparative separations and purifications because of their unique selectivity.

Pentafluorophenyl columns have been used to separate many complex mixtures including tocopherols(36), alkyl-substituted aromatics (30), and phenoxypropionic acid herbicides (26). Taxanes (37) have been chromatographed successfully on PFP columns (see Figure 5). For this separation, the PFP column has been shown to be superior to conventional C18 columns (37).

Fluorinated-alkyl and fluorinated-phenyl phases have been reviewed. These stationary phases are available commercially from several column manufacturers. Each fluorinated phase type has been used for a variety of separations and many of these separations have relied upon a unique stationary phase–solute interaction. Fluorinated phases appear to work best when fluorinated compounds are encountered. They have longer retention times, better selectivity, and work well with high levels of modifiers, making them a strong choice for LC–MS. Fluorinated phases also appear to retain halogenated- and nitro-aromatic compounds strongly. In addition, wide-pore fluorinated phases (for example, 1000 Å are superior for micellar LC. Many of the separations discussed in this column could not be accomplished on C8, C18, or even phenyl phases. Even though a number of studies have been conducted on fluorinated phases, their actual chromatographic interaction mechanism remains unclear. Future studies will bring clarity to these mechanisms and provide the chromatographer with the knowledge and tools necessary to recognize the potential of fluorinated phases. However, for now, enough information has been provided from various investigations and applications that many useful and unique separations can be accomplished with fluorinated phases.

Matthew Przybyciel is with ES Industries, West Berlin, New Jersey. He can be contacted at przybyciel@earthlink.net.